Those whose skill at the archery range or in war is noted and admired by others in the kingdom can be recommended for a number of awards.

You can recommend someone for an award by clicking here.

Order of the Nock

Token for the Order of the Nock – photo by Baroness Ceara Shionnach.

The Order of the Nock is an armigerous award for those who practice, study, and teach the skills of archery either at the butts or in war.  If the recipients does not already have an Award of Arms, this also grants that rank.

The token of this order is a golden nock worn as a pendant – traditionally strung on a green cord or ribbon  for combat archery, and red for target archery.

The Order of the Red Wyvern

Token for the Order of the Red Wyvern – Photo by Baroness Ceara Shionnach.

The Order of the Red Wyvern may be given to those who have distinguished themselves over time by performing outstanding service and great prowess in the Martial Arts. They shall also have demonstrated chivalry, courtesy, and courtly behaviour both on and off the field of combat. Such prowess can include skills in Armoured Combat, Archery, Rapier, the Equestrian Arts, Siege Warfare, or Leadership on the warfield. Elevation to this Order shall confer upon the holders a Grant of Arms, if that person is not already a holder of a Grant of Arms. All bearers of Grants of Arms are entitled to be addressed as The Honourable Lord/Lady.

The token of this order is a silver wyvern

The Lochac Company of Archers 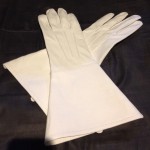 Companionship of the Archers is granted to those who demonstrate high achievement and service to the Kingdom in archery, with high levels of chivalry, courtesy, courtly behaviour and accomplishment. The duties of the members of this Company are to promote and encourage their art within the Kingdom of Lochac. They are to advise the Earl Marshal and the Archery Marshal on, and do research into, all aspects of the art of missile weapons.

Membership of the Company confers an Grant of Arms to the bearer, if they do not have one already, and ranks equal in the order of precedence as the White Scarf and higher in precedence than other varieties of grants of arms. All bearers of Grants of Arms are entitled to be addressed as The Honourable Lord/Lady.

The token of this order is a pair of white leather gloves.