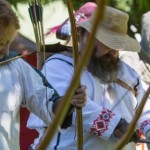 The Duel is a single kill double elimination tournament where archers compete in close range target (not people) shooting. The most accurate shot wins the duel.

To decide the winner of each contest between two archers, we use this target: 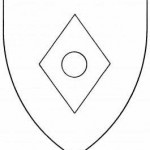 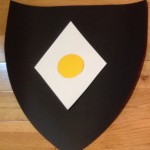 The Shield is black, the diamond white and the round centre is gold. The simplified layout makes it clearer to the crowd who is hitting what. Yes, it does looks like a fried egg!

The target is set only 20 yards away. This makes it fun for spectators who can easily see the outcome of a duel and cheer their favourite competitors.

The is no complicated scoring to be had here. Each archer in a duel has 3 arrows to fire, and 3 only. The best single shot wins.

In the event of both archers hitting the same colour with their best arrow, the one closest to the exact centre of the golden circle wins.

It is possible for an archer to hit black and be closer to the centre than an opponent who hit white. In this case, the archer hitting white still wins.

This is a single kill double elimination contest similar to that enjoyed by other martial disciplines. To be eliminated, an archer must lose two matches over the course of the event.

The pairings for Round 1 are determined by challenge. I encourage archers to introduce themselves to the crowd and issue a challenge to someone of equivalent skill with the bow. Once all archers have a challenger, Round 1 is ready to go.

For my event, I had 5 target set up side by side, allowing up to 10 duelists to compete simultaneously. Two competing archers per target. This speeds up what could otherwise be a lengthy tourney. But if you want to take your time, feel free to set up only one or two targets 🙂
Round 2 and later rounds are determined by the list keeper until there are but two archers remaining for a final duel to determine the winner.

Draws:
It is possible that two archers can hit the same colour with their best single arrow, and remain precisely the same distance from the centre. One fun way to resolve this is to give the archers a quick rematch with 1 single arrow each. We did, and the crowd quite enjoyed it.