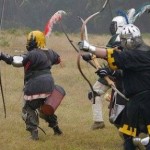 Layout of the Joust

This field was designed by His Excellency Baron Dameon. Two archer’s run’s (40m long and 2.5m wide) are laid out side by side with at least 6 metres between them.

2 archers at a time with 6 arrows each.

The archers start at opposite ends of the field from each other. Each archer has six arrows and walks down their path firing their arrows. If both archers reach the opposite end from where they started, then they return going back along their original path.

The winner is the archer who is left standing. If both archers run out of arrows it is deemed a double kill and the bout will be refought.

The only safe area is directly behind the ends of the field and given potential for an arrow to skip on the ground even that is borderline no matter how far the onlookers are pushed back. So, it is recommended that at least 30 metres be given between spectators and the archers.

When we first ran this, we had a discussion afterwards and the following alternatives were suggested: