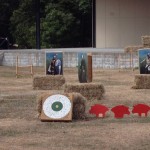 The following novelty shoot was used for the Fall Society Seasonal Archery Competition, running from 1 October to 30 November 2014.

With the Triangle Target which is an equilateral triangle, with one of its points straight up, divided into three equal width horizontal bands, the highest point value is the top part of the triangle. So, if you are aiming for the highest value and your aim is a bit high, left or right, you can miss completely and receive no points. Those that try for the highest value have a greater chance of making no score if they miss, than those that aim for the lower value areas. This provides a high scoring area for the better archers and still has a larger lower scoring area for the average archers.

The three parts of the triangle target from Medieval Japan were said to represent a warrior on horseback. The top, high scoring, triangle was his head. The middle band was his body. And the largest band, the bottom, was his horse.

An addition to this target is to make it a bit more challenging for the highly skilled archers by drawing one additional horizontal line at the upper third of the top or head triangle. This would represent a visor slot and would be a forty-fifth the area of the horse. However, this would give a point value of forty-five which would be too high, because one lucky shot to it and five misses of the target would give more points than hitting the head with all six. A reasonable compromise would be to give a value of fifteen points. However, slight errors in aim are even more apt to create a complete miss and zero points.

The below drawing shows the scoring areas and values of the target. Lines count as higher score. This Scoresheet was created to make keeping track of the ends and the direction of the target easier, Courtesy of An Tir. For the score sheet, go to: http://scores-sca.org/ssac/images/ssac_137_scoresheet.pdf

For target illustrations go to: http://scores-sca.org/public/scores_rules.php?R=25&Shoot=206

The triangle has a 24 inch horizontal base. From the center of the base draw a vertical line 21 inches tall. Draw the side lines from the ends of the base to the top of the center line. Measuring up the center line mark off the following bands starting from the base line. If lines are drawn between the color bands, they should be no wider than 1/8 inch. When complete the center line should *NOT* be visible as a reference line/aim point.

For the SSAC competition, all ends are shot from 20 yards, Youth from 15 yards. It is shot in four ends spelled out below. The SSAC General Rules apply.

For illustrations go to: http://scores-sca.org/public/scores_rules.php?R=25&Shoot=206

For information on the SCA Scores Site and submitting scores, go to: http://scores-sca.org/guides/Public_Guide.pdf