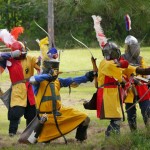 There are some special rules around being a Heavy Archer on the warfield, most of them around the transition from being an archer to being a melee combatant.

You must hold both a Heavy Combatant and a Combat Archery authorisation to be a Heavy Archer.

April 2018 – these rules are currently all under review and testing of changes.

You must be armoured appropriately for the form of combat you are about to engage in.  While you are an archer you may have your fingers exposed, and just be wearing demi-gauntlets, but while fighting as a heavy combatant, your fingers need to be fully protected by your gauntlets or the basket hilt of your sword, or other method. This can be achieved by using full hand protection while doing archery (sometime impractical), or hoping that no one engages you in combat while you are putting on full mitten gauntlets or gumbies, or by using weapons which provide that protection as soon as you pick them up, such as the basket hilt of a sword.

While you are armouring yourself appropriately you are a helpless opponent.

Helpless opponents shall be killed by placing your weapon on the opponent and saying in a loud voice “You are dead, my lord” or an equivalent phrase.

Disposing of your bow

If you are still holding your bow when you opponent gets within 5m, they can declare you slain as they would with a plumed combatant.

If you are safely armoured and are attempting to arm yourself with a back-up weapon, you are not necessarily a helpless opponent, and may be struck in the same way as a spearman reaching for a back-up dagger, you are still trying to take an offensive action.

Your opponent may attempt to declare you dead, believing you to be helpless.  If the defender believes the attacker could have struck them but instead declared them dead, they should accept the kill.