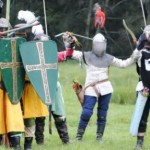 We hope to populate this page with the answers to your frequently asked questions.

If we are shooting at a live armoured target using combat blunts (eg. an Agincourt run), what kind of marshal do we need?  A heavy marshal or a target archery marshal?

The kind of marshal you need depends on the kind of target you are shooting at.  A live target requires a heavy marshal to oversee everything, including the target’s armour inspection and all the arrow inspections.

A combat archery authorsiation is not required for archers shooting at armoured particpants for scenarios such as Agincourt runs or peasant archers firing into a war field from a safe position.

Can children shoot at armoured particpants (eg Agincourt runs or peasant archers firing into a war field from a safe position)?

Yes, the Society Earl Marshal declared that minors may shoot at armoured particpants in these scenarios, even though they are too young to authorise for combat archery.  It’s a pretty cool way to get them interested!

If you have a question about anything related to combat archery, please contact the Deputy Earl Marshal for Archery.