by Rioghan of Saarlands, Krae Glas

Most archery shoots focus on scoring as many points as possible, and the winner is the person who scores the highest total points, or a single scoring hit.

The burnout shoot focuses more on arrow control and a continual improvement in scores.

An archer shoots end after end to remain in the competition, but must get a higher total than the end before. Failing to better the previous end results in that archer being eliminated. 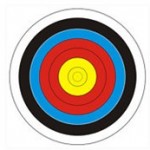 Each end involves an archer shooting 6 arrows and totalling the score that they shot.

With the focus on arrow control, it is optimal to try to increase ones score by only 1 point per end to ensure an archer remains in the competition as long as possible.

Krae Glas has been running this shoot from a fifteen yard line to focus on arrow placement and not just hitting the target face. This shoot though can be run from a longer line. We also run this shoot in pools of 5 to 7, with the top 2 from each pool going into a finals pool were their scores start from scratch. We found this encourages greater spectator tension.

A variant we plan to try is to randomise the chance that when pools combine, the archers may have to continue with the scores from their previous pools.