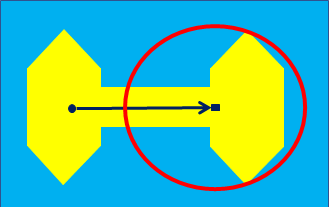 Two 10 metre by 4 metre ships side by side joined by a 6-metre-long boarding plank (1 metre wide). This can either be marked out with normal tourney field ropes or as we did you can use drop cloths, to simulate the ships sides which the combatants can drop down behind. The boarding plank will have normal ropes so anyone crossing it will be more open to attack.

Two ships are locked in combat and the only way to end the deadlock is to get an armoured combattant onto the enemy’s ship.

2 archers and 1 armoured combatant per ship. Each archer has 6 arrows.

Each side must get their armoured combatant onto the opposing ship. Once on the opposing ship the fighter will be within 5 metres of each archer and the archers are therefore slain (see red circle).

If both armoured combatants are slain, then it is a double kill and the bout will be refought.

There is no safe area for spectators, so it is recommended that they be kept at least 30 metres away from the combat. While there are, areas fanning out from the boarding plank that are unlikely to see arrows directly fired through that area because it is only 6 metres wide there is a good chance of arrows skipping on the ground and ending up in these areas.